I meant to post this on Thursday, but I fell asleep on the couch Wednesday night before I finished writing. 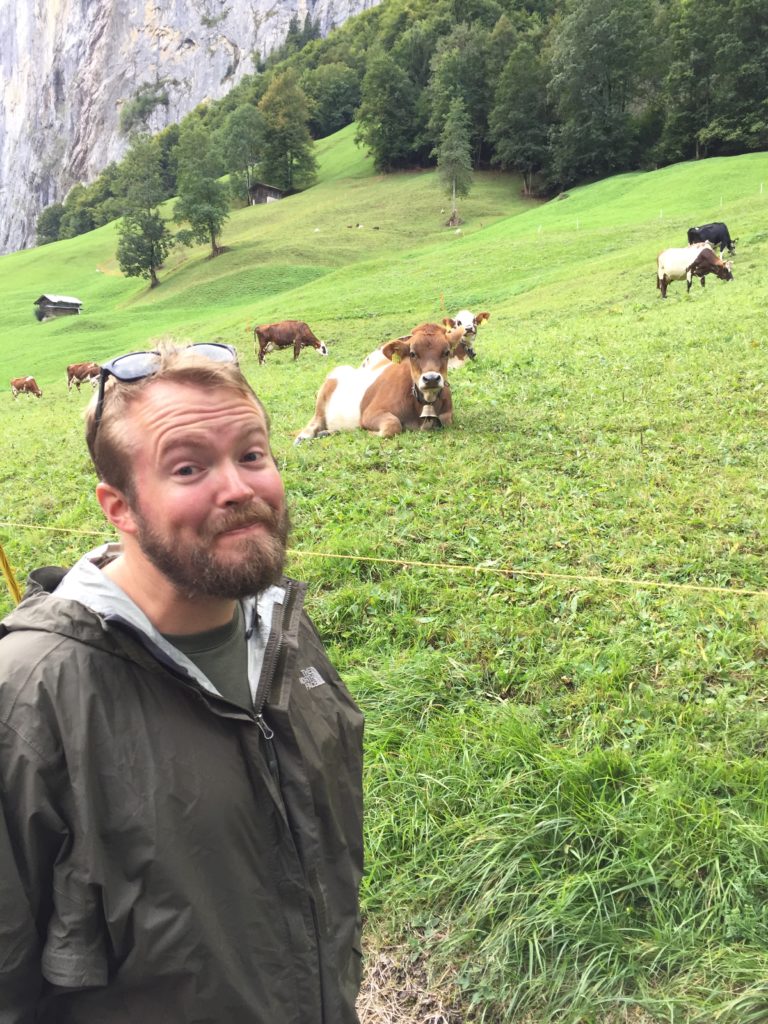 I made it through Kris’s birthday.  They say it’s hard getting past milestones like birthdays and holidays.  I think I did okay on Kris’s actual birthday, which was a week ago on April 20th.  All of Kris’s family and my family came over to my house for dinner. Arbor CrossFit did a memorial WOD for Kris and made some awesome shirts!  So I went to the 6am class because that was the class Kris and I usually went to, and then I went again at 3:30pm with my sister-in-laws, Beth, Becca, and Amie, and brother, Samuel, because they wanted to do the Kris Norbryhn workout too.  And my best Kendra came into town and stayed with me for the whole weekend.

Me and Becca after the Kris Norbryhn WOD

On Saturday a big group of us, friends, siblings, and coworkers, went to Lucky 13 for drinks and pizza, and I had a great time.  It was really good to see everyone. It does help to be around people who miss him too. We closed that place down (at 10pm)! And then afterwards some of us went to Jumpin’ Janet’s.  There is a picture of Kris at that bar. A huge group of people went to Jumpin’ Janet’s after the funeral and our friends, Nick and Heather, took one of the pictures from the tables at the funeral reception and left it at Janet’s.

There was another letdown after last weekend.  Not as bad as the letdown after the funeral. I was pretty sad (and slightly hungover, if I’m being honest) on Sunday.  And then I was really tired on Monday and Tuesday.  Wednesday was a little better. Thursday was okay.

I don’t think there’s a wrong or right way to grieve.  The process is different for everyone. You get yourself in trouble when you don’t grieve.

I was talking to Kendra the other day. She said that a lot of people ask her how I’m doing. That people read my posts and and it’s almost like they’re shocked, or maybe surprised, at my sadness.  It’s like people want, or need, to know that I’m doing okay.  The other day someone said to me, “You’re doing okay, right? You’re back at work.”  And I know they didn’t mean anything by it, but I replied, “No, it hasn’t even been two months….”

It’s like people are really uncomfortable being around someone who’s going through a hard time.  If you’re not okay, then you must need counseling or a grief support group or medications.  Our society is messed up.  It’s okay to not be okay.

And, honestly, sometimes I am okay. But an hour later I can be sitting on the floor in my kitchen sobbing.  It’s barely been two months.  And I don’t know what happened to my husband.

It seems to hit me hardest in the kitchen.  Kris and I spent a lot of time cooking for each other. Kitchens always end up being the gathering place, like the heart of the house. Whenever one of us was cooking, the other was usually hanging out in the kitchen to keep the other person company. 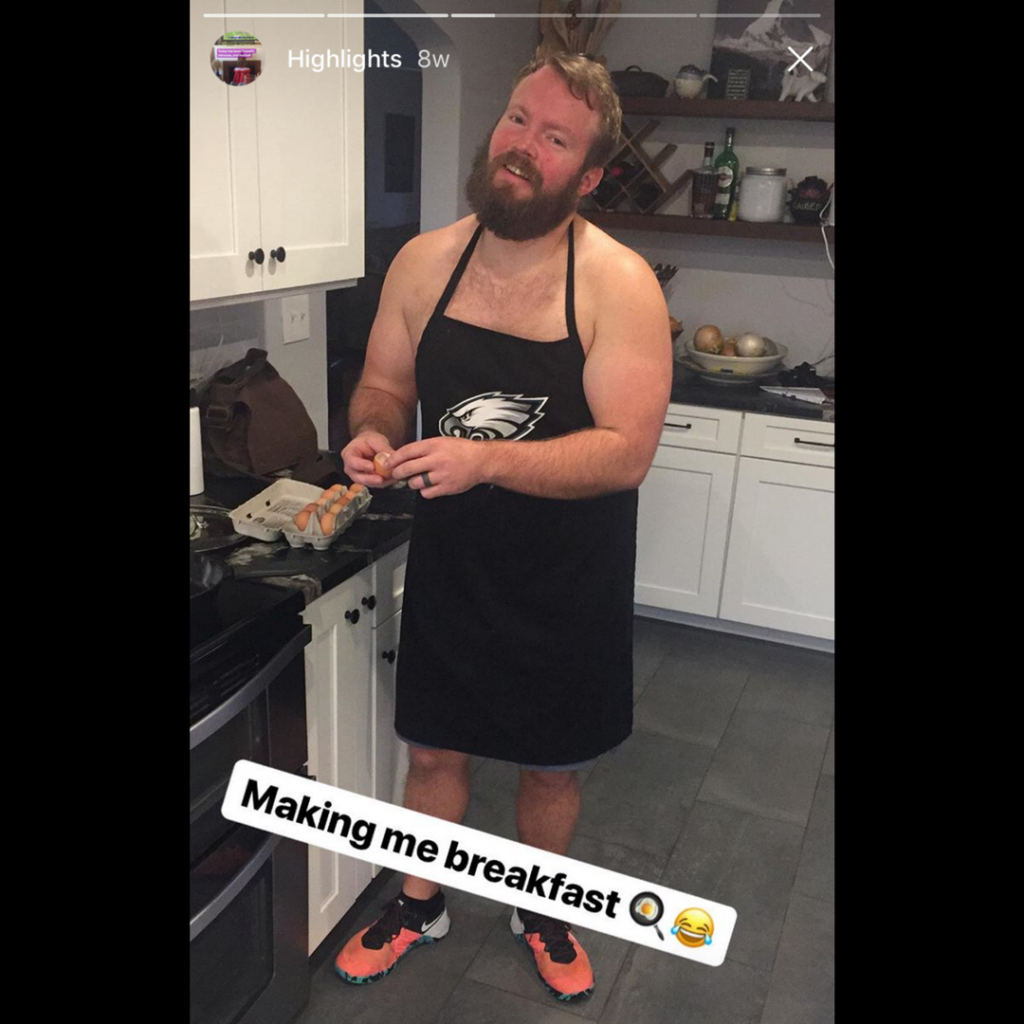 A typical morning…Kris making me breakfast – he is wearing shots FYI.

I can be in the kitchen (or anywhere else), making coffee or something, and out of nowhere I’ll get a knot in my stomach, right in the middle, just below my rib cage.  And then it travels up into my chest and it’s literally like my heart stops beating for a second.  I have to catch my breath.  And then, if I let it, that knot moves into the back of my throat and I’m on the verge of crying, on the edge of letting that first sob escape.  I’ve never had a panic attack, but my guess is that it’s a similar feeling.

To me, the best way to explain it, is that it’s like just before you fall.  You might try to catch yourself but it’s usually too late.

If you’ve ever tripped and fallen as an adult, it’s awful.  I used to go jogging a lot in the mornings before work. Part of my loop has a dirt trail, and I have fallen twice on that path.  Just jogging along and next thing I know, flat on my face. The shock of falling, getting the wind knocked out of me, the scraped knee, it happened so fast I didn’t even realize it until I was facedown in the dirt.   And then I cried, not because I was hurt, but because it surprised me, and I remember thinking, “What is wrong with me? Seriously, how did I just fall?”

I used to think I was afraid of heights.  I went skydiving to try to get over my fear, and as we were walking to the plane, the pilot said, “Most people aren’t afraid of heights, they’re afraid of falling.” And I remember thinking, yep, that’s totally me.

So now I realize that I actually have an irrational fear of falling.  I hate walking across a parking lot covered in ice or snow. I get so tense worrying about falling.  I don’t ski or mountain bike because of the downhill and falling part.  And I’m completely paranoid about falling down stairs. Kris thought all this was pretty hilarious and made fun of me relentlessly for how slowly and carefully I’d pick my way across an icy parking lot.

In Switzerland, I went bungee jumping.  Another attempt to get over my fear of heights (or falling – it didn’t work, by the way).  In Switzerland, you pay your money, sign a waiver, and they give you a beer. Kendra, Martin, and I did the Stockhorn bungee jump in the Swiss Alps. It’s a 450 foot bungee jump out of a cable car, over a lake.  They blasted techno music in the cable car and the hills were full of grazing cattle wearing bells, the sound of the bells echoing all around us.  Bungee jumping was (I wrote “is” at first but changed it to “was” – what I’m going through now is much harder) the scariest thing I had ever done.  You have to force yourself to jump, all on your own. And that feeling of free falling…..I don’t think I can explain it to you, not unless you’ve done it.

But that feeling of falling, that’s what grief is like.  That hard hit to the ground, the forcing yourself to jump, or more so, the fear of falling and being so tense all the time, trying not to fall.